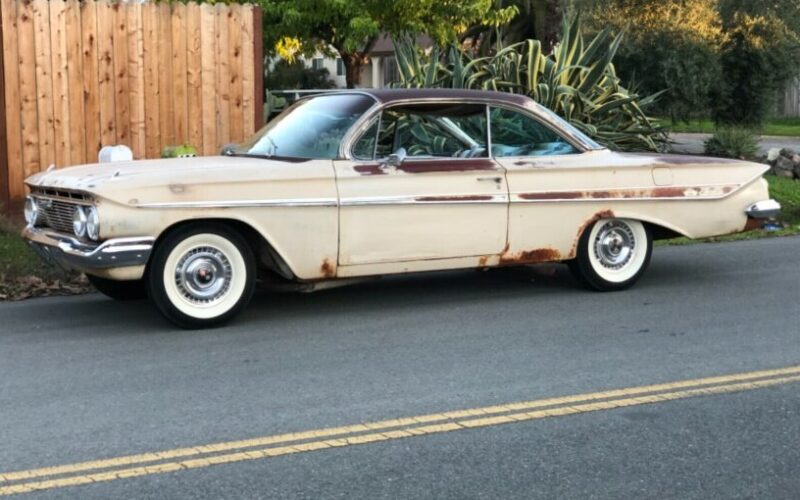 In other words, 1961 was the year when the SS Equipment Package was officially introduced by Chevrolet, with this option available for the entire Impala lineup except for the Noman wagon.

The SS has therefore become one of the most sought-after models even after all these days, though on the other hand, it’s mostly found on two-door hardtops and convertibles.

The engine lineup included a wide array of choices, and the standard unit was once again the six-cylinder developing 135 horsepower. When it comes to V8s, the GM brand also provided customers with so many options to choose from, starting with the 283 (4.7-liter) available for this model year in both 2-barrel and 4-barrel versions.

The Impala that we have here wasn’t born with the $53.80 Super Sport package, but it still rolled off the assembly lines with a 283 under the hood. The good news is the original engine is still there, and what’s more, it’s still running today. However, eBay seller cruzzn64gto claims some fixes are needed as far as the engine is concerned, and at first glance, it looks like the carburetor is the one to blame.

This 1961 Impala is a California barn find that hasn’t moved in 38 years, and the last registration sticker indeed confirms the car hasn’t seen a public road since 1983.

There’s obviously the typical rust here and there, but the seller claims all parts are still in the car. If you’re in the restoration business, you certainly know that a complete classic car is something you don’t see too often, and given everything is still original, a full restoration is theoretically a totally doable job.

This Impala obviously doesn’t come in a mint condition, but on the other hand, it looks surprisingly good for a car this old. While we’re not being told where exactly it’s been stored, there’s a good chance the right conditions were maintained, and the moderate amount of rust is a clear suggestion in this regard.

It’s not really a surprise this Impala won’t sell for pocket money. The seller isn’t willing to let the car go for less than $35,000, and they say the price could also be changed in the near future as they’re already working on giving this Impala further tweaks here and there.