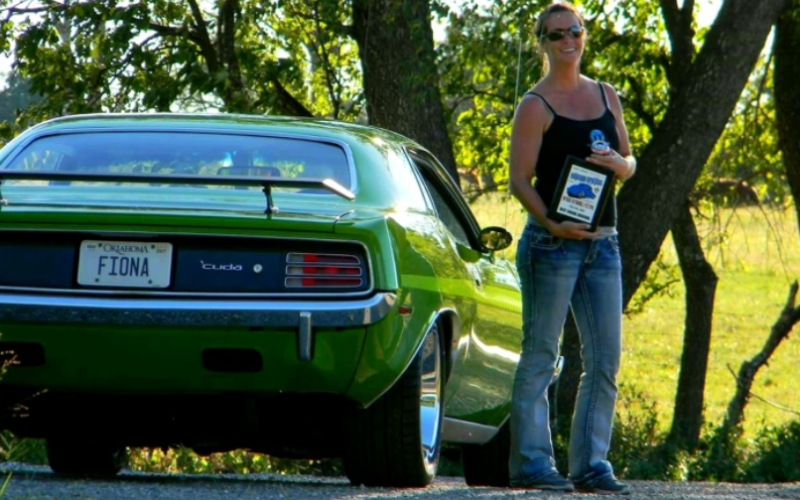 Today we are going to tell you the story of the outstanding 1970 Plymouth Cuda 440 6BBL called Fiona.

Fiona in fact is selected for a display vehicle at the 2020 Carlisle Chrysler Nationals.

For us the story of Sharma Hardee and her 1970 Plymouth Cuda is an amazing inspiration. This story proves that passion, dedication and hard work will always pay off.

This is a journey that makes us better and stronger. That’s all we are saying, and here is what Sharma wanted to share with you all.

“To pick a time my love for cars started would be very difficult. Playing Matchbox cars and Tonka trucks with my little brother more often than playing dolls with my sisters as a young girl. Having an older sister who would do burnouts and cookies in front of my mom’s restaurant with me in her 1972 Dodge Charger just to fire our mom up, definitely played a big part in molding me into the die hard car girl I am today.”

“I bought my first muscle car, a 1970 Nova, when I was 16 years old. The vehicle was short lived as the 305 engine did not love NOS like I did. Next in line would be my 1971 Chevelle, which would eventually fund my Mopar. At twenty two years old I passed what I soon learned was a 1970 Plymouth Cuda in the small town of Battle Ground WA. I loved what I saw and had to have one.”

The next two years were spent searching for the perfect vehicle, in the middle of 90’s they weren’t hard to find like they are today. In the summer of ’97 I would find my 1970 Plymouth Cuda. One owner, woman owned California E-body, which lost her original owner sadly who had willed it to her tree hugging nephew in Portland Oregon. He thought the 318 engine was an appalling gas guzzler and felt it should not be out on the highways and he was not going to partake in destroying our environment, just my luck.

“After I lifted the trunk mat and carpet and didn’t find absolutely no rust anywhere I found a glove box full of every single receipt of any work she had done until that day. This was it, this was the Cuda I had been searching for with zero rust, one owner, big ugly side body molding, hubcaps with white wall bias tires and not one single screw or hole drilled anywhere with not even a factory sticker missing.”

“I handed that man his $2,200 smile, and once I got home in Washington with the car I took a lot of slack for buying one of the most undesirable cars made as a 318/904 combo after a two year search. I didn’t care what anyone thought, I was now a proud owner of a rust free 1970 Plymouth Cuda that even in the 90’s wasn’t easy to find.”

“I was excited but also pregnant so the next year or two didn’t happen a lot, with my ’70 Cuda. The goal was to finish the build before I turned 30 years old. As we all know life changes everything and my goal soon changed to 40 due to a chain of events. With the Mopar now mostly disassembled and the restoration started it would quickly get stalled by a divorce that would eventually stop the build completely. Choosing food and clothes for my two boys or a car was no choice at all, so with a heavy heart I sold the car to a friend who promised to sell it back as soon as I was back on my feet.”

One year later I was so excited to make the stop at his shop with cash in hand to buy my car back. The car sat in the exact spot in the back corner of the shop where I pushed it off the trailer in tears the year before. He had the shell as he had never come to get any parts that were still stored in my barn. I put the money on the work bench with what I thought was a generous one thousand dollar thank you added to the amount he bought the car from me for and he stammered and shuddered and eventually said No, he won’t sell it back to me since he wanted to build a AAR Clone with it.

In my life there were only a few times that I felt my heart sink in my chest, and this was one of them. A lot of other attempts were made to buy it back over the years. I would find myself standing in the parking lot of Firm Feel Suspension looking at a ’73 Cuda or what was left of the shell of a retired race car. Although it was not my car I had come to the realization that I probably was never getting the ’70 back. I made the decision standing there to make one last phone call to the guy that had my car. I had made up my mind if he said No this time I was going to buy the shell and I would build that vehicle instead.

I made the call, asked him for a cash price that night and he threw a number of nearly four times what he bought it from me for. I drove the hour long drive straight to his shop and laid the cash on the bench and he handed me my title that was still in my name. After a very long sleepless night the following morning I would back the trailer into the same spot I unloaded the 1970 Cuda seven years before and load my car back up and take her home to where all of the parts including every nut and bolt were still stored and waiting for the restoration . The very next day would be the start of a 4-year build that would have never happened without amazing friends and family.

“3 years to come were consumed with the body and paint; endless hours of wire wheeling, sanding, blocking and eventually wet sanding would pay off in the end. The time had come to choose the color. Standing in the paint store I still had not decided between Petty Blue and Sassy Grass Green. I had already purchased the 440 Hockey Stick stripe and all I needed now was the body color. The green was laid down by a good friend and assembly would consume every single night and weekend for the next nine months.”

While the months were coming down it looked more like a car and every single part that went on seemed to fight me whether the paint wouldn’t lay down right or the lines wouldn’t line up where I wanted them but each day something got done although a lot of days you couldn’t see the progress. During this process I continued to watch a 440-6BBL set up on Craigslist. After over a $3,000 drop in price, I finally spent the $1,800 and bought the intake with freshly rebuilt carbs and now my 440 Plymouth Cuda was going to be a 440-6 Mopar so there was nothing I could do but order new hood emblems to replace the 440 emblems I purchased. When you have a 318/904 car, you can do anything you want!

By this time my Plymouth Cuda original 318 engine that was built back in the 90’s when I first tore the car down had been handed down and powered my oldest son’s 1974 Duster and still does to this day. The 440 was coming together and going in the car and it was time to place the order for all of the interior pieces I needed now that the Dynamat sound and heat barrier was laid down in the entire interior. That large parts order would take hours to find part numbers including research to verify it was the correct part for the car.

The interior of the Cuda came together slowly since the complete rebuild of the original seats had its own challenges duplicating the original canvas, prepping and painting springs and getting the Legendary seat covers pulled in tight with the new foam with its perfect lines all proved to test my patience at times. The hog rings were removed more than once and I received a lot of help to pull the covers tight enough. The wiring was now all installed and she had lights for the first time in over 20 years.

Firm feel suspension and steering would make Fiona handle like a new car far beyond my expectations. The 8 ¾ rear end with 3.23 gears and 727 trans with a stage 2 shift kit would prove to be a decent package for a driver. I would lower the Cuda 1 ½ inches and set her on wheels that made her look like a Hot Wheels car with that color combo. She was on her own power with only a few things left to do as I celebrated my 40th birthday preparing to show her off at Hot August Nights 2014 in Reno Nevada in just a month.

TTI 2.5″ X-pipe exhaust with Flowmaster Super 44’s is now wrapped around a Gear Vendor Over/Under Drive unit thanks to my husband Rick. He is also responsible for not allowing Fiona to ever make a 15-sec 1/4 mile pass of shame again. Rick loves to push every car we own to the point of finding their weak spots. After a smoke show at a local car cruise he found that her modest 440 had stock push rods that he bent into lovely shapes that night. After that she received many upgrades but remains looking as stock as possible. The 1970 Cuda is powered by a mildly built 440 running in the high 12’s.

Rick was in process of building a 499 Stroker with heavily ported Stealth heads, port matched six pack intake and extrude honed and polished Stock HP exhaust manifolds all machined by Larry Smith. This will make Fiona a respectable 11-second street car sitting on Billet Specialty wheels. A hidden aftermarket Rockford Stereo system has been installed as well as 4.10 gears and Strange Axles and driveline to support her new power train. The rear defogger switch powers the electric fan and the ashtray hides the power station for the Gear Vendor Overdrive.

My 1970 Plymouth Cuda will never be finished, there always will be upgrades I am wishing for, but in the meantime we will continue to drive Fiona in honor of my friend that I lost during the build to cancer battle.

Rocky Lane nicknamed me Fiona years ago when the original Shrek movie was released. She bears that name not because she is green but because I lost a huge mentor and friend whose memory I will always carry with me.

Years later after talking about it constantly, Rick found the 1972 Dodge Charger again for me. To our shock the vehicle had arrived in Oklahoma 1 year before I did and it was only just around 3 hours from me. Now it is in a shell, with no interior, no glass, no trim and no power train. Although the current owner doesn’t want the car, he does not seem willing to sell it to me either.

I have already waited years to get this Mopar, so I am not giving up. I just hope it’s meant to be and one day that vehicle will be in my shop being built into a car she would smile down upon. In the meantime we have gotten a 1973 Dodge Charger to build in her memory which will be featured soon doing burnouts in my sister’s memory.