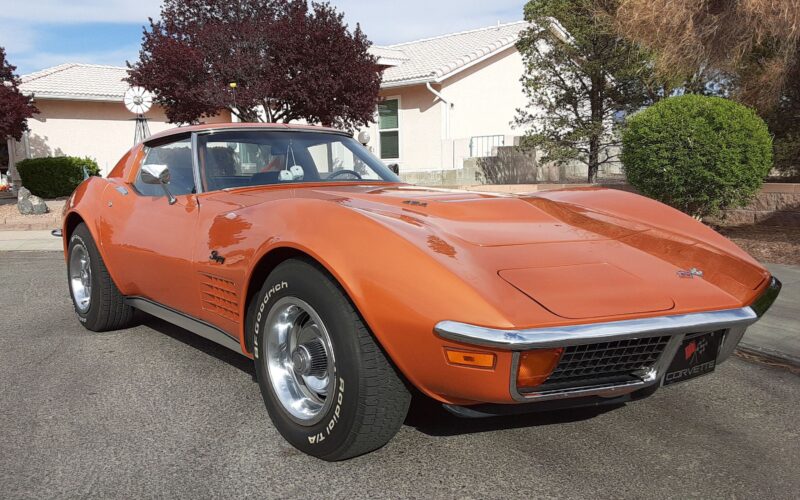 The 1972 model year represented a pivotal moment in the Corvette’s history. It was the last year for front and rear chrome bumpers and the final year for the LS5 454 engine, which offered the pinnacle of performance at the time. The big-block V-8 would soldier on a couple more years, but not as the storied LS5. The ’72 model year was also the last for the removable rear window and the bright-trim “egg crate” fender vent trim.

This 1972 Chevrolet Corvette, in Ontario Orange, is powered by the LS5 and a four-speed transmission. The seller, who has owned this powerful sports car for eight years, has provided photographs showing the partial VIN stamping in the block that confirms this is a numbers-matching engine under the hood. He adds that the car received a body-off restoration approximately a decade ago. The previous owner was said to take meticulous care of this Vette and the seller reports that he has done the same, with regular servicing including a recent cooling system flush and brake-system overhaul. The seller reports the car starts, runs and drives well — and also shows very well.

According to documentation the seller acquired with the car, the original LS5 454-cu.in. V-8 was rebuilt in 2008 to factory specifications, with work and components that included a Magnaflux inspection of the block and heads, a 0.030-inch overbore of the block, machined rods and new rod bolts, a polished crankshaft, align-honed mains, new pistons and rings, new timing chain, a new original-spec camshaft, machined cylinder heads, new valvetrain components and more. It is said to start easily — and without smoke — with a few pumps of the gas pedal and run well after it warms up. The four-speed gearbox is also said to shift smoothly. Additionally, the engine starter was recently replaced and a battery-power kill switch was installed, to prevent power drains when the car sits for extended periods.

Per the seller, this Corvette’s original 987-code Ontario Orange color was resprayed during the restoration and remains in very-good-appearing condition. Noted blemishes includes a small crack above the bumper, on the right-front side of the nose, as well as a small chip on the rear quarter panel, below the antenna. They are documented in the accompanying photos. All of the exterior trim is said to be intact and in good-appearing conditioning, including the chrome finish of the bumpers. The glass is believed to be original — down to the “Astro Ventilation” decals — and shows age-related wear, but no cracks or chips. The seals are also reported to be in good condition, with a few, small “hairline cracks” in the seal around the rear window. All of the exterior lighting is said to work normally, as well as the red high-beam indicator lamp inside the car. The car has T-tops, with no reported leaks.

Inside, the black leather interior appears to be in very good condition, with no apparent cracks, splits or holes in the dash pad or door panels. The seat covers and carpet also appear to be in very good condition, with minimal visible wear and no noted holes or tears. All of the gauges are reported to work normally, along with the clock, power windows, heater and air-conditioning system, which has been updated to R134a refrigerant. There’s also an aftermarket cassette stereo system that is said to work well, but plays through the original speakers, which the seller notes are “not of good quality.”