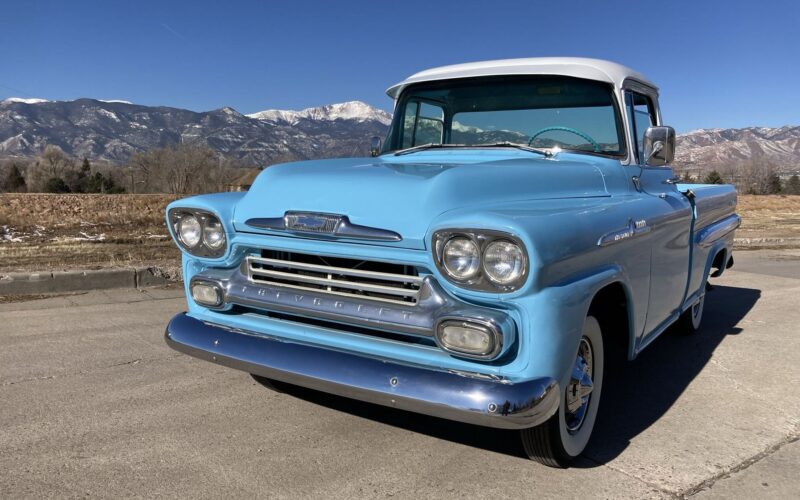 Chevrolet pickups of any generation are an excellent jumping-off point for practically any project you can visualize, and maintaining fidelity to factory accuracy is one such possible outcome. That’s what happened with this 1958 Chevrolet Apache, one of more than 278,000 light trucks that the bowtie brigade built that year. It’s been redone to a very high level of authenticity, a process that’s believed to have taken place just on either side of 2000. Purchased from a North Carolina seller who had stored it for many years, this half-ton Apache is described as being mechanically sound, a willing driver, and the recent recipient of new brakes. It has the larger rear cab window, which the seller characterizes as a particularly desirable feature.

The base engine in the Apache line for 1958 was the Thriftmaster straight-six, Chevrolet’s then-current name for its fabled OHV powerplant. With a single Rochester carburetor and a compression ratio of 8.25:1, the cast-iron Thriftmaster 235-cu.in. engine was rated by the manufacturer at 145 horsepower. While the issue hasn’t been researched, the seller believes this engine is original to the truck, and makes no claims about any rebuild history. Starting from cold requires engaging the manual choke and pumping the accelerator three times. A few drops of fluid are present after the Apache is parked for several months. This Apache is optioned with the floor-shifted four-speed manual transmission, which is said to change gears without issue. The engine bay looks stock, appears to have new ignition wires, and is acceptably clean.

The Dawn Blue and Pure White paint on this Apache is believed to be approximately 20 years old, and is described as being in good condition today. The seller reports some scratches and chips to the finish, but no more serious issues, and is unaware of any corrosion on the truck, now or in the past. The truck is missing none of its exterior trim, which looks to be straight and in very good condition. The chrome also appears to be in very good shape. Signs of usage can be seen on the cargo bed floor and its locating hardware, but the bed itself appears to be free of dents and scrapes. The cab seals are said to be in good shape and the truck is believed to be leak-free, although it isn’t driven in inclement weather by the seller. The cab glass, including the large rear window, is termed to be in good condition, and all the exterior lighting is reported functional. The undercarriage has moderate levels of surface corrosion and grime.

The cab’s bench seat is properly adjustable, and its surfaces are described as being in good condition, with no rips or tears. The cab carpeting is said to be in acceptable shape while showing some wear, and a full original-style rubber floor mat will be included with the sale. The seller describes the cab headliner as being in good shape. A separate switch for the heater fan has been added, and directional signals were installed sometime in the past. The painted steel dashboard looks to be in excellent condition, appears to be missing none of its trim, and mounts factory instrumentation that is said to be fully functional except for the AM radio, which remains in the dash.

The seller says this Apache’s chassis was serviced within the past year, with adjustments made as necessary. The brakes are reported to be new, the shock absorbers and chassis bushings are said to be in good shape, and the unassisted steering is said to work without issue. The steel disc wheels appear to be in good condition and mount Firestone wide whitewalls that are less than a year old, per the seller.