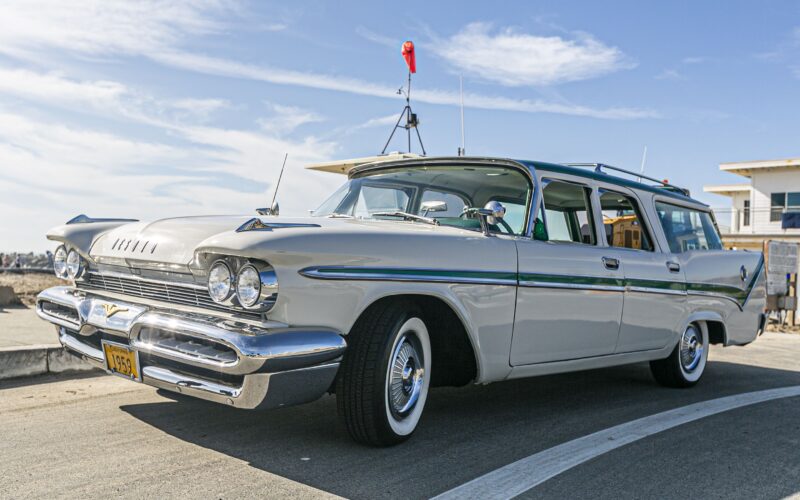 In terms of pure scarcity, station wagons have it all over any number of Full Classics, muscle cars and European exotics. Here’s why: Wagons weren’t loved. Kids carelessly kicked and scuffed the bulkheads in the cargo area, which was already thoroughly scraped and soiled. Battered into oblivion, they were unceremoniously junked. That’s why when a wagon as rare as this nine-passenger 1959 De Soto Firesweep comes along, especially in admirably presentable condition like this one, it’s immediately noteworthy. Its own demise just two years distant, De Soto produced a total of 1,179 Firesweep Explorer nine-passenger station wagons in 1959, and according to the seller, only a dozen remain roadworthy today. It’s said to have a solid body, only minor surface corrosion, new chrome, and a fully restored interior. Used regularly to tow vintage trailers, the Explorer has been recently upgraded to four-wheel disc brakes, and does indeed have a functional trailer hitch.

The engine installed in the Firesweep series for 1959 was Chrysler’s wedge-head V-8, displacing 361 cubic inches. With 10.0:1 compression, the engine received its fuel mixture from a two-barrel Carter carburetor and produced 295 horsepower. The engine in this Explorer is believed to be original to the car and, according to the seller, received a full rebuild about 1,000 miles ago, which included a rebuilt generator, radiator service and a new exhaust system. The engine is said to start from cold, without smoke, with a little coaxing from the accelerator. The TorqueFlite three-speed automatic transmission is also original to the car and is said to change gears without issues. A few small fluid leaks are noted where the engine mates to the transmission. The Explorer’s engine bay presents as stock and nearly spotless.

The seller located this Explorer in a Maryland barn, where it had been sitting for some 30 years until the previous owner started to renew its paint and undercoating. The car was shipped to California about 15 years ago, where the restoration commenced in earnest. The bodywork and paint, done by the previous owner, is said to be remain in overall good condition. The seller reports no dents, but a number of unspecified small blemishes, along with small areas of rust. The corrosion appears to be mostly limited to surfaces underneath the car, but one blemish can be seen at the lower rear of the passenger’s side quarter panel, behind the wheel opening. The bodywork appears straight and in good condition. The seller says 99 percent of the chrome was renewed during the restoration; the trim now presents as straight and in good shape. The glass is all original, and while the windshield is slightly pitted, a replacement is included with the sale. The Explorer also has aftermarket plastic wind wings. All the exterior lighting is reported functional. Some surface corrosion can be seen on non-undercoated components underneath the car.

The interior of this Explorer is very largely new, the result of fresh upholstery and carpeting kits from SMS Auto Fabrics that have been recently installed by professionals for all three rows of seats, and remain in visibly excellent condition. The headliner is made from new pressed paper-type material and sags slightly, but is said to be visually correct. The seller says none of the interior trim is absent. The painted steel dashboard, with a crack-free top, incorporates the complete array of factory engine gauges, which are said to be fully functional. Some hints of incipient surface rust can be observed on the dash. The factory AM radio in the dash is for display only; it’s been supplanted by a contemporary Pioneer audio system in the glove compartment, but the De Soto will need rear speakers. The seller shares that the under-dash vent cables will need repair or possibly replacement.

The car’s major departure from factory stock has been the fitment of aftermarket disc brakes on all four wheels, a recent conversion, and adjustable air shocks. The Explorer’s shock absorbers and chassis bushings are said to be less than five years old. The factory power steering is said to be free of leaks and capable of tracking straight. The steel disc wheels have turbine-type factory wheel covers that look to be in excellent condition. The wide whitewalls date to the previous owner and show scuffing in places. Based on age alone, they should be replaced before the car is driven any significant distance.