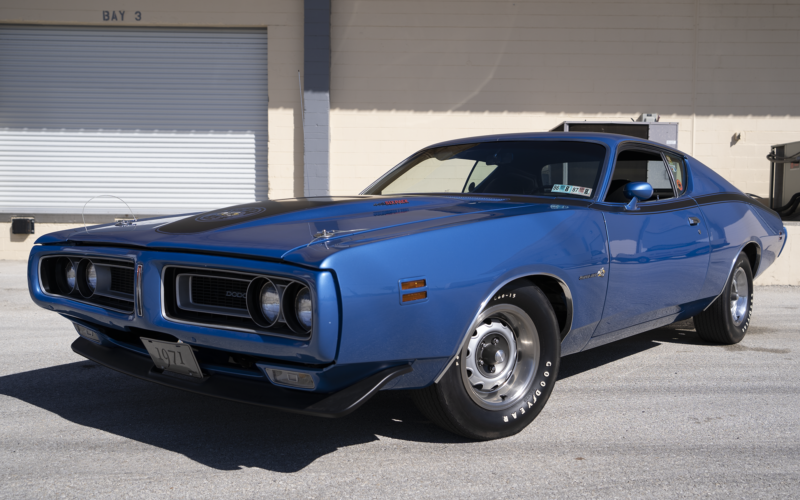 The 1971 Dodge Charger Super Bee is an interesting chapter in the anthology of Mopar muscle cars. When Chrysler revamped the B-body platform for 1971, the two-door Dodge Coronet model, which had served as the foundation for the Super Bee, was exorcised from the lineup. Rather than let a good muscle car name go to waste, Dodge migrated it to the Charger, where it served one final year as a more economical performance entry, slotted below the top-line R/T.

Only 5,054 Super Bees were built in its final year and this Bright Blue Metallic 1971 Dodge Charger Super Bee is one of 69 built with the 440 Six Pack, automatic transmission and 4.10-geared Dana axle, according to the seller. It reportedly has a known history, all the way back to its first owner, and it was previously part of Otis Chandler’s landmark muscle car collection. It was also previously owned by pro wrestler Paul Wight (a.k.a. “The Big Show”) and featured on the December 1987 cover of MoPerformance magazine

According to the seller, this ’71 Super Bee retains its numbers-matching 440 Six Pack engine. Its rebuilt history is unknown, but it is said to start easily and without smoke. The seller notes it is a “good running” engine that “never runs hot.” There are no reported leaks with it, either. It is paired with a non-original TorqueFlite 727 three-speed automatic that is believed to be from 1968 or ’69 production. It is said to “shift great,” but has a small leak. A Sure Grip-equipped, 4.10-geared Dana 60 rear axle rounds out the drivetrain combination, as part of the available Super Track Pak. It also has the correct 26-inch radiator and fan shroud.

The exterior wears a respray of the original “B5” Bright Blue Metallic paint, which was reportedly done in 2009. Bodywork at the time included some rust repair of the lower rear rocker panels. The seller reports the paintwork remains in very good condition, with a couple of paint chips on the body-color front elastomeric bumper. The glass is also said to be in very good condition, with no cracks or scratches, while the window seals are reported to be in “excellent” condition, with no known leaks. The headlights and taillights are said to work normally, but the backup lamps do not. Additional exterior features include a body-color rear bumper, front and rear spoilers, tinted glass, left and right painted racing mirrors, and 15 x 7-inch Rallye wheels with trim rings.

This Bee’s black vinyl interior appears to be in very good condition, with minimal visible wear and seat covers, carpet and the headliner in “excellent,” condition, according to the seller. There are no apparent cracks or splits in the dash pad or door panels. All of the lights and gauges are said to work normally, as does the original door buzzer and AM/FM radio. Additionally factory equipment and options include a rear speaker, bucket seats and console.

The chassis and restoration have reportedly been maintained to factory specifications, with equipment including power steering and power-assisted front disc brakes. The seller reports the car “drives straight, with no shaking.” Also, there are no known leaks with the power steering system, while the front brakes have “newer” pads and rotors. The seller also reports the trim rings on the Rally wheels show some wear and that the wheels themselves are wrapped with new reproduction Polyglas tires that have approximately 300 miles on them.