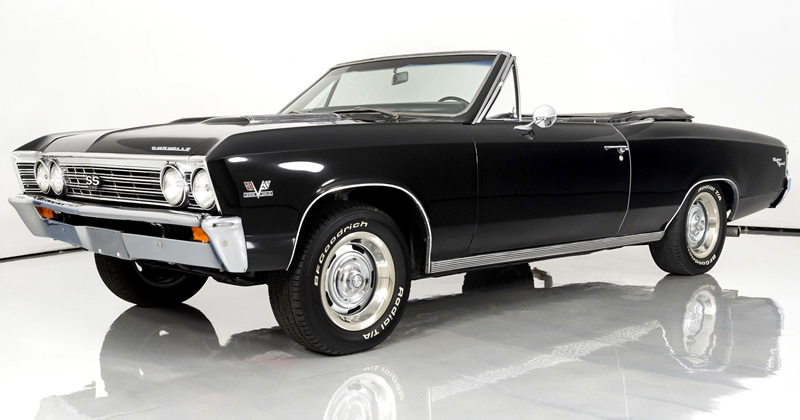 This is a genuine 1967 Chevrolet Chevelle SS 396 that was originally built in Kansas, MO. This triple black beauty has its pedigree verified with the correct 138 VIN code.

This car is top-of-the-line for Chevelle and with its 396 cubic inch V8, she’s a beautiful beast. That power is paired up with a four-speed manual transmission.

The front of the original brochure confidently told us, “What you’ll see inside will probably bring on a severe compulsion to go driving. (If so, consider yourself a healthy, discriminating motorist.)”

The SS 396 was easy to spot against other Chevelles with it’s black accented grille with SS 396 badge, brightwork around the front and back wheel housing, simulated air intakes on the hood, body sill moldings and black painted rear cove with SS 396 medallion.

Standard for the Chevelle SS396 was the mighty 396 cubic inch Turbo-Jet V8 that came with a 3-speed manual transmission and output 325 horsepower. However, this car was chosen with the optional L34 396 that output 350 hp and would have cost an additional $105.

SOME AVAILABLE CHEVELLE OPTIONS IN 1967