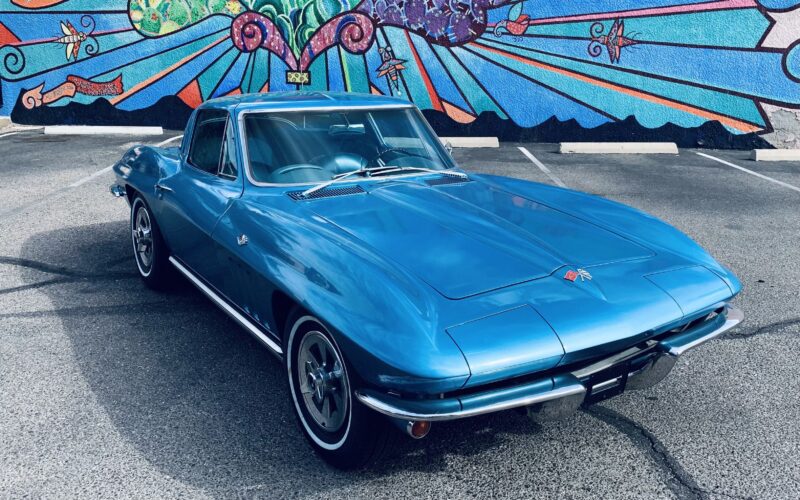 It’s rare for any vehicle to spend 55 years with the same family, but that’s the story with this Nassau Blue 1965 Chevrolet Corvette. It was purchased in the Los Angeles area, in January 1965, and remained in the family until 2020, when the seller purchased it. This matching-numbers 327/300 car is well equipped with a four-speed, factory air conditioning (that reportedly still works), power windows, power brakes, AM/FM radio and a telescoping steering column. The seller notes one repaint in the Vette’s lifetime, but never a full restoration. Original paperwork for it includes the 1965 bill of sale, along with the factory option sheet.

According to the bill of sale, this Corvette was ordered with the 300-horsepower version of the 327-cu.in. V-8 and, according to the seller, that original engine still resides under hood. Photos of the block stamping corroborate the matching numbers with a “105887” block stamping that corresponds with the last six digits of the VIN. There’s also a visible “HJ” stamping that corresponds with the powertrain combination consisting of the 300-hp engine, air conditioning and a manual transmission. The seller indicates the engine has never been rebuilt and that it starts, idles and runs well, with perhaps a little smoke on cold starts and that the car does smoke under hard acceleration but didn’t before it went into storage. The four-speed manual transmission is said to shift well, but the age and mileage of the clutch is unknown. There is also a small oil leak around the engine’s oil pan. The engine compartment looks to be in original, unrestored condition.

According to the seller, the Nassau Blue paint on this Corvette was resprayed years ago, due to the California sun’s effect on the original lacquer. It is described as presentable, but not show quality, showing some lacquer checks and mild orange peel, along with some minor paint nicks and chips that have been touched up. There are no reported cracks or splits in the car’s fiberglass body, and the exterior glass and seals are said to be in very good condition. The lighting, including the electric headlamp doors, is reported to work normally. The chrome exterior trim also appears to be in very good condition.

The blue interior is said by the seller to be original, down to the seat covers, carpet, door panels and headliner. The driver’s seat cover has a small crack and some separation in the stitching, while the passenger’s seat does not show such wear. The original carpet and headliner are described as being in very good condition for their age, showing some age-related wear, while the driver’s door panel shows wear and cracking, particularly around the armrest. There is also visible wear on the dashboard, console and seat belts. The speedometer and odometer are not functional, but the rest of the gauges are said to work normally. The original AM/FM radio is in place and reportedly works and the power windows also reportedly work well. The heater and factory air conditioning system are said to work well.

There are no known rust issues with the Corvette’s chassis, which doesn’t even show much surface corrosion, after 56 years in a dry climate. The front and rear suspension systems are stock and said to be in good working condition, but the last chassis service is unknown. The photos show aged shocks and dried, cracked bushings. The seller reports no drivability or braking issues. The car rolls on the original steel wheels with wheel covers and 205/75R15 radial tires, which show good tread depth, but are reportedly quite old.