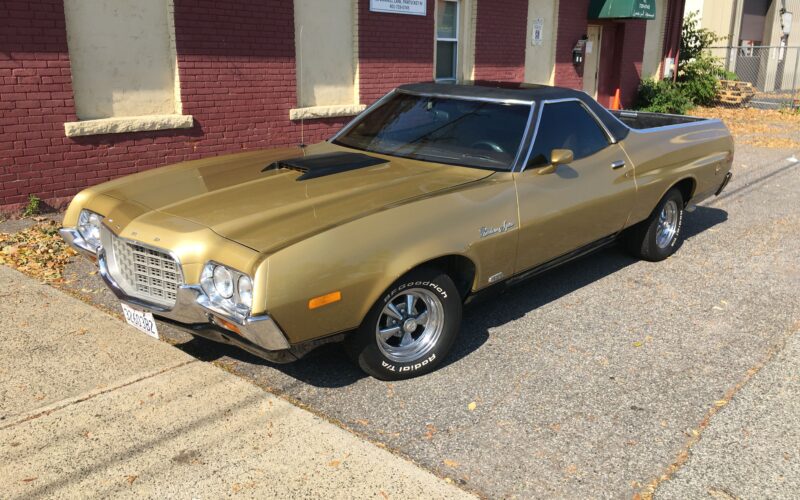 In 1972, Chevrolet production of the El Camino dwarfed that of its Ford rival, the Ranchero, by nearly 15 to one. Ford made just 4,283 Rancheros in 1972, and when you start considering the options this 1972 Ford Ranchero was equipped with—notably the 429-cu.in. V-8, the numbers dwindle much, much lower.

According to the accompanying Marti Report, this 1972 Ranchero was of just 166 equipped with a 429-cu.in. four-barrel carbureted V-8. The 429 under the hood of this car is believed to be original to this Ford. The engine bay appears to be clean and presentable, with what appears to be fresh belts and hoses, and an open-element air cleaner. One minor update is the aluminum radiator catch can mounted on the driver’s side inner fender. Some of the original Ford blue paint is still on the engine block and intake manifold, and the original cast iron exhaust manifolds are still in place. The car has been equipped with an electric fuel pump with a shutoff on the dash. Once the pump is engaged, the car starts with two pumps of the accelerator, according to the seller.

According to the Marti Report, every one of the 429-cu.in. V-8-equipped Ranchero Squires was also equipped with a C-6 three-speed automatic transmission. According to the seller, the column-shifted C-6 has a shift kit, and shifts hard on hard acceleration, enough to spin the tires on gear changes. The automatic transmission is shifted on the column.

The seller has provided several photos showing the undercarriage and underbody. All of them show a car that appears to have no rust underneath, either on the frame or the underside of the body. The steering is power assisted, and there are no leaks from the pump or lines, according to the seller’s notes, which also state that there’s no abnormal play in the steering wheel. The shocks and bushings are described as “respectable,” with no leaks in the shocks or visible cracks in the bushings. There’s no service history listed on the brakes, which are power assisted with front discs. This Ranchero rides on Cragar S/S wheels that are showing some pitting, but no major curb rash. The tires are 235/60R14 BFGoodrich Radial T/As, with no post-2000 DOT date codes, and the seller indicates that the tires are “old” and should be replaced.

The Marti Report suggests that this car was originally white with full white vinyl top. For most of its life, it appears that this car spent its time either on the West Coast in San Francisco, or 3,000 miles west in Hawaii, and the lack of obvious rust on the body panels bears that out. Today, it’s garaged in Rhode Island when not used in the winter months, further protecting the body panels. The quality of the gold paint with ghost flames “presents well,” according to the seller. There are scratches and a small indent showing on the passenger door and the rear panel from the seller’s notes. There’s an aftermarket sunroof along with the black vinyl top, and the seller says that there’s a latch missing. Since these cars are rare, it’s important that specific emblems like the “Ranchero Squire” emblems be present, and they appear to be in good shape, along with the rest of the emblems and chrome trim. What’s missing from this Ranchero Squire is the “Squire” part of the package: the wood-tone accents and trim that were also part of the equipment list on Country Squire wagons. The rear bumper – originally chrome – is now painted black.

The Ginger brocade and vinyl seats appear to be original to the car and in good overall condition with no rips or collapsed foam or springs. The Ginger carpet visible in the photos also appears to be in good shape, and is protected by black rubber floor mats. The door panels and armrests visible in the photos look undamaged. According to the Marti Report, this is the only 1972 Ranchero Squire equipped with both the 429 and the Visibility Group, which includes map lights, footwell lights and an underhood lamp. The dash on Ranchero Squire trim levels had the same wood-tone as the exterior, and it appears to be in good condition, though there has been a hole drilled for the fuel pump switch. The instrument panel is full of stock Ford gauges and they all function, according to the seller. The original radio has been replaced by a non-descript 1980s-era AM/FM/cassette player that isn’t working. The car had factory air conditioning, and all the equipment is in place, but it’s not currently functioning.