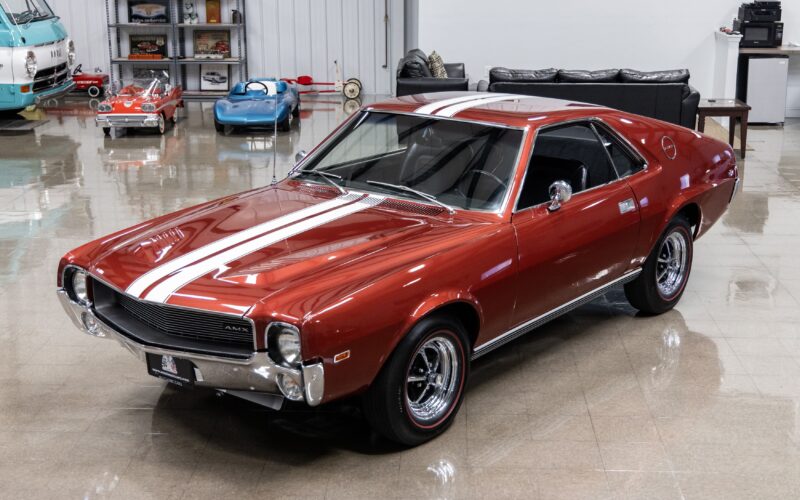 Among the players in the pony car wars that played out in the late Sixties, AMC’s bulldog AMX offered a two-seat alternative to the competition. With a wheelbase almost a foot shorter than the contemporary Mustang, Camaro or Barracuda, and a selection of V-8 engines, the AMX was exactly the sort of car that proved AMC could take on the Detroit heavyweights in the muscle car game.

The selling dealer shares that this 1968 AMC AMX was purchased in 1969 by a pair of brothers who intention was to keep it in pristine condition and never sell it. Months later, one of the brothers shipped off to Vietnam and unfortunately did not make the return trip home. His surviving brother in Michigan kept the car for the next 36 years, including having it refinished in its original Calcutta Russet in 2000. Upon his passing in 2005, after the car had accumulated 45,000 miles, his widow sold it to an enthusiast in Georgia who kept the AMX for 11 years and had some restoration work performed on it. In 2016, it was acquired by MS Classic Cars, the selling dealer, who sold the car to a New Hampshire enthusiast. After approximately four years of ownership, MS Classic Cars re-purchased the car and is now offering it here on Hemmings Auctions.

This AMX now shows 53,347 original miles. It is powered by the original 390 V-8, featuring the Group #19 performance camshaft and three-speed automatic transmission. In AMC circles, the car has been dubbed the “Famous AMX,” because of the awards, press and other attention it has received over the years. It is a winner of multiple concours events, including the AMO National Concours, and it has been featured with Chip Foose and Jay Leno. Additionally, this AMX has been featured on Spike TV and in numerous magazines. DVDs of its screen appearances, copies of magazines and all of the show awards are included with the sale.

The exterior of this AMX was restored approximately 15 years ago, according to the seller, when the second owner replaced the rear quarter panels, because of some minor rust in them. The repairs were done by an AMC restorer in Ohio and included NOS sheet metal for both sides, along with a respray of the original Calcutta Russet Metallic exterior color and dual white stripes. The body lines and gaps on the car appear to be very good and the seller reports the hood, doors and trunk close “very nicely.” MS Classic Cars recently detailed the paint to a show-quality shine. The windshield was reportedly replaced by the original owner in 1999, with all of the glass remaining original and appearing to remain in good condition on this low-mileage example. All of the exterior trim and brightwork are also said to be in very good condition. The car rolls on factory-correct 14-inch Magnum 500 wheels that are reported to be in “like new” condition. They wear reproduction E70-14 Firestone Wide Oval Redline Sport tires. The car also comes with a set of 15-inch Cragar S/S wheels wrapped with BFGoodrich Radial TA tires.

The black vinyl interior of this AMX is mostly original, according to the seller, and its apparent condition reflects light use over the years, with minimal visible wear. The carpet was replaced over the years and the bucket seat cover were re-foamed and recovered in 1999. The dashboard shows the common factory “warp,” that was the subject of a service bulletin, when the car was new, but the repair was apparently never made on this car. A printed copy of the service bulletin is included. The plaque on the center of the dash face reads #06199. Additional equipment includes Rally Pac gauges. The stock radio was converted to AM/FM with RCA inputs and it also has upgraded dual-cone speakers that retain the factory appearance. Instructions for the radio and speakers are included. According to the seller, everything in the interior is in working order, with exception of the remote driver’s side mirror. The mirror does move a little but not enough to adjust, but it will reportedly adjust manually. The trunk compartment is also detailed and includes the factory trunk mat. The car is equipped with the factory space-saver tire and equipment.