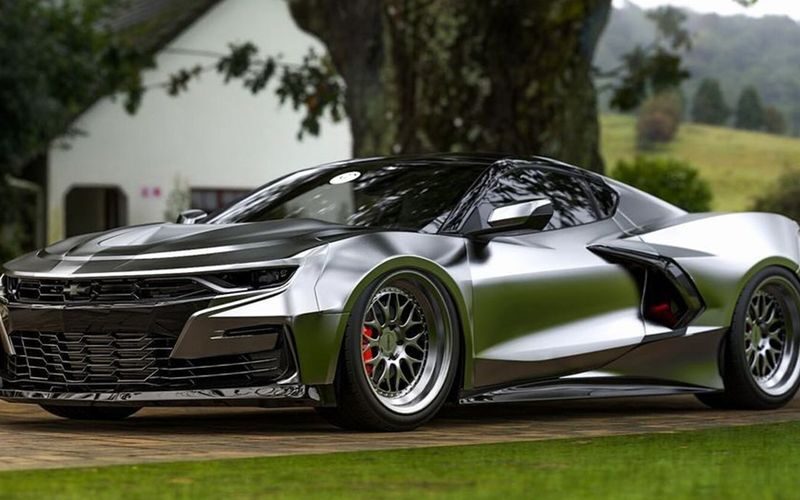 Cars can be pieces of art to showcase on the road. If you want your car to grab the attention of many, you can have it painted in unusual colors or have it wrapped in bright liveries. But of course, anything that shines and glimmers is bound to catch attention. That’s why this graphic rendering of a mid-engine Chevrolet Camaro in chrome finish has caught our undue attention.

This render is a creation of automotive designer Rostislav Prokop (@rostislav_prokop on Instagram) of Olomouc, Czech Republic. His graphic creations have been astonishing, as they reimagine vehicles—both modern and vintage—to their more radical yet still realistic versions. It’s not the first time he’s rendered a mid-engine Chevy Camaro either.

Is it a Camaro or a Corvette? It’s definitely a Camaro, but a mid-engine one packed with a body kit. This is how a mid-engine Camaro might look if Chevy decides to reload the model for the seventh generation. The current sixth generation of the Camaro is expected by the end of the 2023 model year and Chevrolet has yet to announce plans for the next-gen model.

A good thing about graphic rendering is that it could make dreams come alive if not realized. A mid-engine Camaro seems like a great idea, but it might not be in a standout all-chrome finish. An all-chrome Camaro (in real world) with its shiny attitude would get the attention you need, including that of accidents and even police officers.

After all, a vehicle finished in chrome could reflect sunlight to the eyes of other drivers (temporary blinding them) and possibly result in a crash. This is the wisdom behind legislations in some towns and states that prohibit glossy finishes or wraps. If you intend to wrap your car in chrome, better first check local or state laws. The last thing you’d want is a chrome handcuff.

Then again, this chrome mid-engine Camaro is just a graphic render. It doesn’t break any laws in any way. It’s an exercise of creativity and healthy thinking, and it’s grabbing the attention of online citizens too.