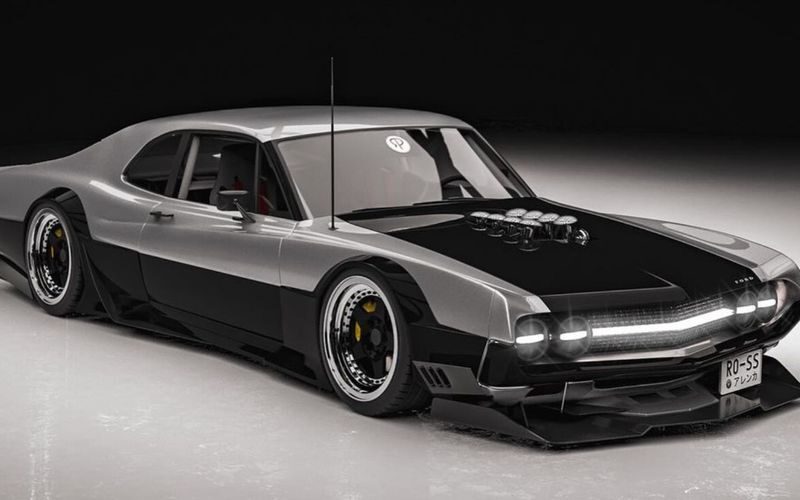 One thing that is great about car renderings is that there are no limits. You are not restricted to just creating an image of a car that already exists. You can create something mind-blowing and unique. And something that has added to that is the Cyberpunk 2077 game. It has been hotly anticipated for years, and renderers have jumped on the opportunity to create crazy cars inspired by the game. One of these renderers is Rostislav Prokop who’s created this stunning Ford-based render.

Rostislav is a very talented artist who has produced some spectacular renders over the years. And this latest one is no different. It is a modified Ford Falcon rendering that has come straight out of the Cyberpunk world. Taking a look at the front of the car, we can see a giant splitter that is certainly not stock, adding a very groovy bit of styling to the Falcon. Moving along the hood you can see the presumably massive C8 engine popping out, giving an indication as to how much power this car is harnessing.

The theme of aggression seems to be the most prevailing one of this car. The back of the car continues with that theme that was started at the front; there is a massive rear diffuser with strakes so you will have all the downforce and grip that you need. And it won’t have escaped your attention that it has also been lowered quite dramatically. Somehow though, despite being lowered it still retains much of the character a classic Ford Falcon does.

The paint scheme of this car is something else. It is silver/grey with a black hood for added aggression. The lower half of the car is also black, giving the Falcon a stunning two-tone livery. It does still retain the classic Ford Falcon headlights; strictly speaking, it has four of them and what appears to be a light beam stretching across the front to link all of those headlights up. Rostislav has called this thing the “Black Mamba” and that is highly appropriate for it you have to say—it really does stare you down.