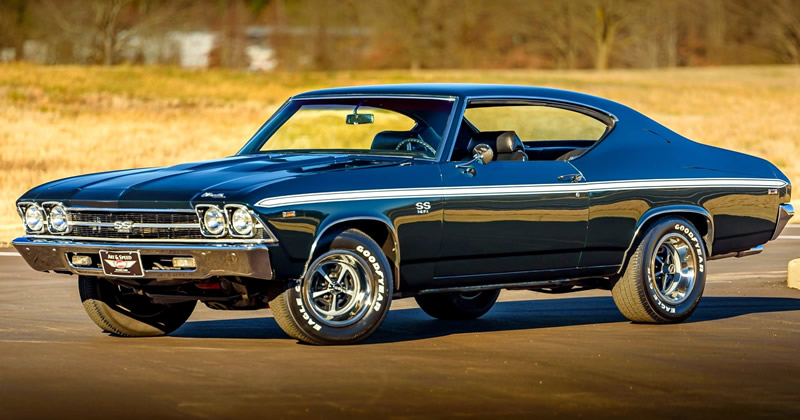 Chevelles of the late sixties always prove popular but the 1969 SS 396 Sport Coupe is a firm favorite with many of us. Seen here in painted in Fathom Green and white stripes it looks both beautiful and a force to be reckoned with.

The look of the ’69 Chevelle Malibu didn’t change much from the previous year. The new models were easy to spot as the deletion of the vent windows gave the car a cleaner look. (Note: The 300 Deluxe models retained the vent windows)

1969 saw the Super Sport now back to being an optional package rather than a model in its own right. This meant that, for this year only, you could have bought a SS 396 2-door post sedan. The total cost of the SS package was $347.60.

SS models had dash and door panels with SS identification to highlight the package. The only exception was the 2-door sedan which, because of retaining the vent window, needed different door panels so didn’t get the badge.

Under the hood the SS option included a 396 cubic inch V8 delivering 325 horsepower.

This car is paired with a 4-speed manual transmission – a $322 option when the car was ordered new (a 3-speed manual was standard). To help stop that power, the SS package came with power disc brakes.

A 1969 model Chevelle Malibu Sport Coupe would have cost you $2,601 if you had ordered one originally, plus the cost of the SS package.

This car spent most of its life with one Alabama owner and is sure to turn plenty of heads.