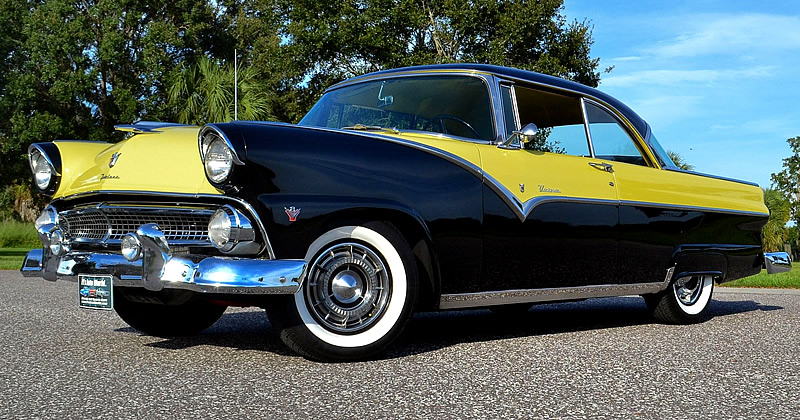 1955 was a big year for most automobile manufacturers with most of them giving their cars a totally new look. Ford was no different with their cars looking completely new and fresh. They were arguably entering the period where they produced some of their finest looking cars.

These new cars were longer, lower and wider. Ford’s really big news this year was the launch of the Thunderbird and all their cars were styled in harmony with this new beauty.

Fairlane was the new top trim level replacing the Crestline series. They are instantly recognizable by their striking V-shaped side trim. They also came with fender skirts as standard.

Victoria was the name Ford gave to their pillarless hardtop models. This beautifully restored 2-door Fairlane Victoria is presented here in Raven Black and Goldenrod Yellow, one of 21 two-tone combinations available for 1955. It was a bold color combination that has been affectionally labeled as the ‘Bumblebee‘ color scheme.

Inside you’ll find the new for ’55, Astra-Dial instrument panel. It did have one carry over though. The transparent hood over the speedometer that was introduced the previous year and was something that wouldn’t make it onto the 1956 models. Note that Fairlanes had a steering wheel and column that were color-blended with interior and exterior colors.

Under the hood is a 272 cubic inch V8 engine. The standard V8 (U-code) had a 2-barrel carburetor and output 162 horsepower. This is paired with a Ford-O-Matic automatic transmission rather than the standard 3-speed manual.