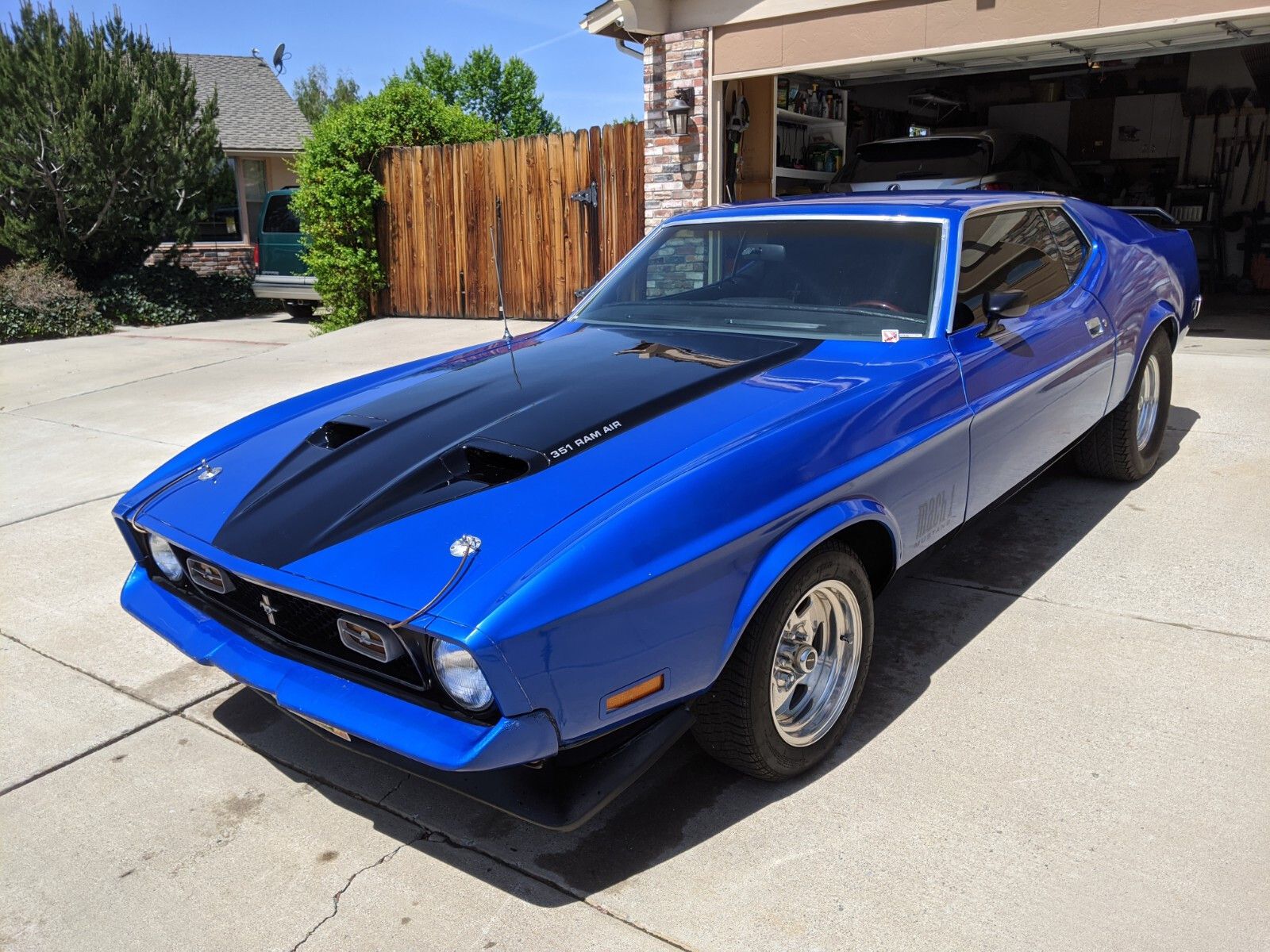 According to the seller of this 1971 Ford Mustang Mach 1, the car was “in desperate need of mechanical attention” when he acquired it. He has spent the last couple of years and thousands of dollars restoring its drivetrain, from the 351 Cleveland engine and Top Loader four-speed manual transmission, to the cooling system, exhaust system and more. It is now reported to be in very good running condition.

A Marti report for the car shows it is an original Mach 1, which has undergone a color change to dark blue, along with the addition of some aftermarket performance parts. The seller rates the car’s overall condition as #3, but reports having renewed the all the major mechanical systems.

Per the “V” code on the door ID tag, the original color for this car was Light Pewter, but it was repainted blue prior to the seller’s acquisition of it. He says there are “a few small chips” in the finish, but “the body is straight.” There is no apparent rust and the glass and window seals are said to be in good condition, along with the exterior bright trim, which appears to shine well. All of the exterior lighting works.

The black vinyl interior has been re-trimmed with seat covers featuring blue inserts — and Mustang “running horse” logos — that complement the exterior. The seat upholstery, along with the door panels and dash pad, is in very good condition, with no significant visible wear and no rips or tears, but some visible fading in the dash pad and tops of the door panels. The carpet and headliner are also reported to be in very good condition. Additional aftermarket upgrades include a wood-rimmed steering wheel and a three-gauge panel, as well as a fire extinguisher mounted between the seats. The amp gauge is not hooked up, but all of the other gauges work normally, according to the seller who adds that the car also has functional air conditioning — a must in its Sparks, Nevada hometown. There is no radio in the car and the brake pedal cover is worn to the point of needing replacement. An uninstalled center console goes with the sale.

This Mach 1 was born with a 351 Cleveland V-8 engine and that’s what still resides under the hood. The seller is not certain whether it’s the original engine, but it has been recently rebuilt and now has less than 500 miles on it. Performance enhancements include an Edelbrock Performer RPM intake manifold, Edelbrock four-barrel carburetor, Doug Thorley ceramic-coated headers and a custom exhaust system. There’s also a Summit Racing high-energy ignition distributor and a new radiator. There are no reported leaks or cooling issues with the engine and it reportedly starts, idles and runs very well. The engine compartment features fabricated shock tower braces.

Backing the 351C is a recently installed rebuilt Top Loader four-speed manual gearbox, which sends the engine’s torque to a 9-inch rear axle. The ID sticker indicates the car came with 3.00-geared Traction Lok (limited-slip) rear axle. It is not known whether the original gear set is in place. There are no known leaks with the transmission or axle.

This vehicle will be sold on a clean Nevada title in the seller’s name. Additional paperwork include a Marti report, a complete set of factory service manuals, extensive receipts involving the recent work done during the seller’s ownership, and a laminated wiring diagram.

With all the hard work on the powertrain taken care of, this 1971 Ford Mustang Mach 1’s few needed finishing touches can be selected by the next owner. It’s a way to personalize this muscle car, while enjoying every gear change with the fresh 351 engine and Top Loader four-speed.