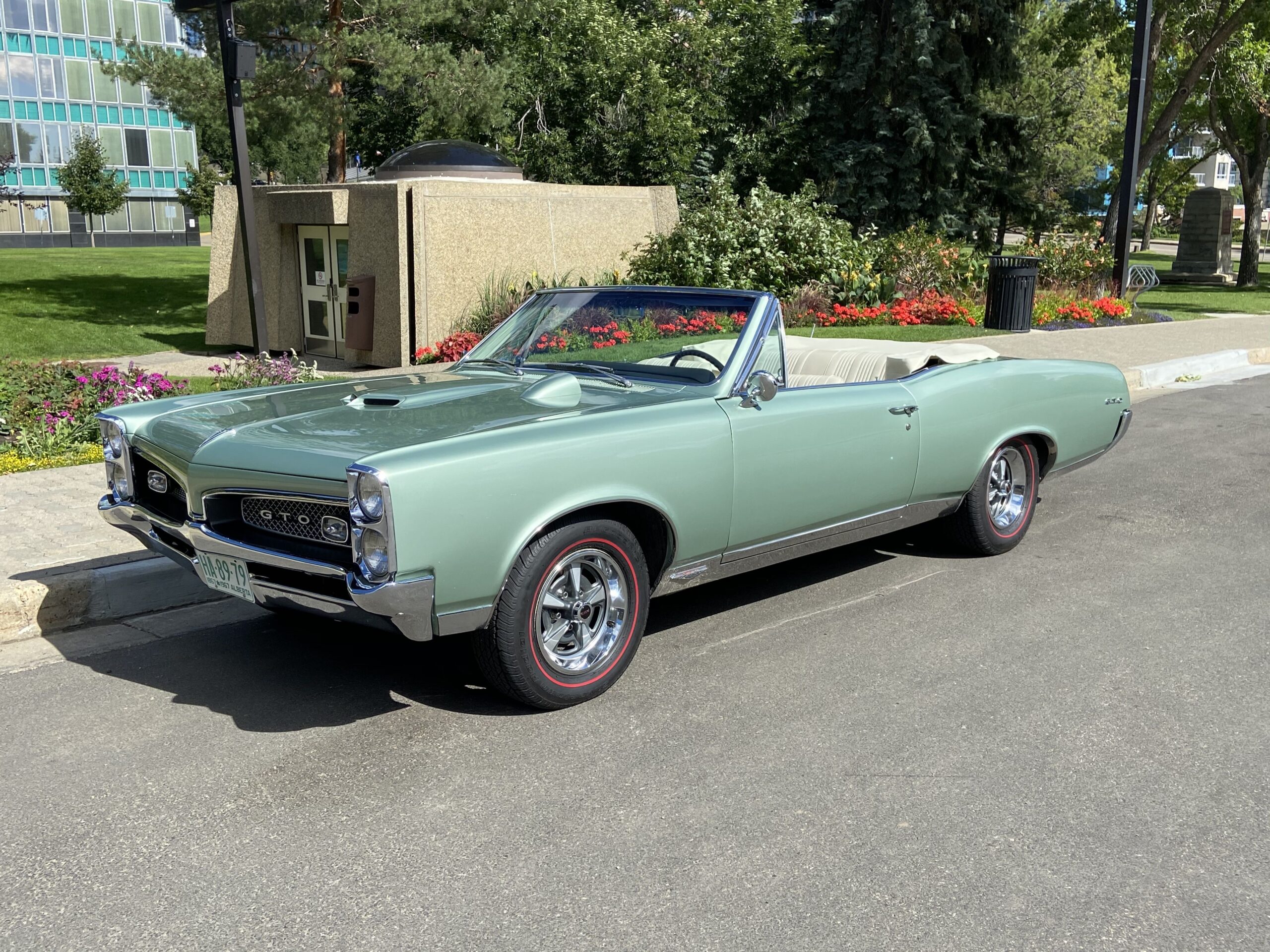 Treated to a frame-off restoration about a decade ago, this 1967 GTO convertible, in Linden Green with a white top and a Parchment interior, is a numbers-matching, high-optioned example of Pontiac’s genre-defining muscle car — and one the owner says “runs beautifully.”

As the “242” code at the beginning of the VIN indicates, this is a true GTO, with Pontiac Historic Services documentation supporting its provenance. It’s an original air-conditioning car, with a hood tach, Rallye II wheels on redline tires, the Hurst dual-gate (aka “his and hers”) shifter and every available power option. The owner purchased the car nine years ago in its restored condition and has used it for pleasure drives since.

The car left the Baltimore, Maryland assembly plant painted Linden Green, per the “H” code on the cowl-mounted body identification plate. That original color was re-sprayed during the restoration. There was no extensive rust repair known to have been performed on the body, which remains visibly free of corrosion. The paint appears to maintain a good shine, with only a couple of cracks in the original-style lacquer and some scratching just behind the passenger door, from apparent rubbing contact. The brightwork and glass show well, with no cracks or chips in any of the glass. The seals and moldings are also in good condition, with no known leaks. The factory hood tachometer works normally. Additionally, the white convertible top is in very good condition, with no splits or tears, and it operates normally, according to the seller.

As with the exterior, the Black/Parchment vinyl interior was completely stripped and redone during the restoration. The front and rear seats were recovered at the time and look to remain in excellent condition, with essentially no visual wear, including the hard seatbacks, which show no apparent scratches. The carpet is believed to be original and also appears to be in good condition, but shows some wear commensurate with its apparent age. All of the interior trim is in place and correct for the ’67 GTO and there are no splits or cracks in the dash pad. Per the seller, all the interior lights work and all the gauges work normally, along with the heater and air-conditioning system. The GTO always had a long list of options available and the first owner of this car eagerly checked plenty of those boxes on the order sheet, equipping this car with a host of power-assisted amenities including the windows, steering, brake, convertible top, driver’s seat, antenna and trunk release. The only non-standard features include an upgraded AM/FM radio with a vintage appearance and an upgraded dash speaker.

The engine is the original, numbers-matching 335-horsepower, 400-cubic-inch V-8, which has about 5,000 miles on a stock-type rebuild. The owner reports it runs very well, with no smoke at startup and no leaks. The engine has an aftermarket MSD ignition coil and plug wires and there is some visible discoloration on the cylinder heads and intake manifold that is consistent with Pontiac V-8 engines that see regular operation.

The engine is paired with GM’s Turbo Hydra-Matic 400 three-speed automatic transmission, which is controlled via a Hurst dual-gate shifter in the center console. It reportedly shifts smoothly, with no known issues or leaks. No known leaks or weeps have been observed from the rear axle, either.

The chassis and suspension were restored and rebuilt, respectively, during the restoration, which was about 10 years ago. The car has been driven approximately 5,000 miles since then and the chassis and suspension components remain in good working order, with no known problems, leaks or needs, according to the seller who also reports smooth, vibration-free driving, with no excessive play in the power steering system and no grabbing or wandering when braking. The car rolls on 15-inch Pontiac Rallye II wheels that are wrapped with BFGoodrich Silvertown Radial redline tires. The owner reports they are about 10 years old and retain approximately 80 percent of their tread.

This vehicle will be sold with the proper Alberta-issued documents for proper transfer of ownership. Additional paperwork includes PHS documentation, which corroborates the original production details of the car, but the basics speak for themselves: It’s a legit 1967 Pontiac GTO Convertible with a hood tach, factory air conditioning and classic redline tires mounted on iconic Rallye II wheels. It’s a timeless combination from the model that launched the muscle car era.