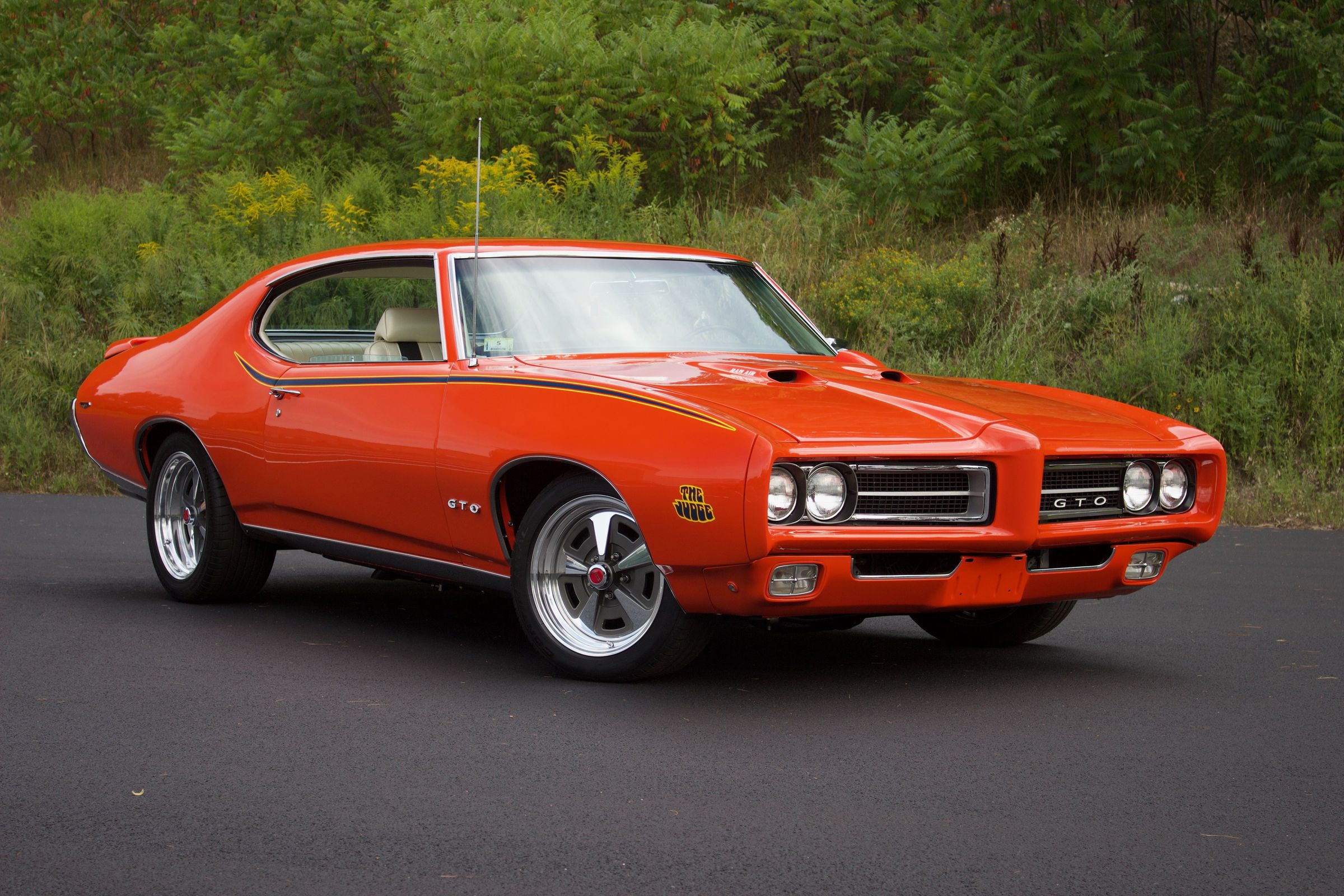 Completed nearly 15 years ago, this restomodded GTO Judge hardtop — in Carousel Red — was ahead of the curve when it comes to the popular trend of enhancing the performance and modernizing the driving experience of vintage muscle cars. In fact, its early, yet prescient, take on the theme was strong enough to earn the December 2006 cover of High Performance Pontiac magazine.

This authentic 242-code 1969 Pontiac GTO Judge has accumulated only 6,700 miles since the complete, “no expense spared” redo was finished in 2006, with motivation coming from a 500-horsepower, 467-cubic-inch monster V-8 engine built on the aftermarket Indian Adventures IA cylinder block and backed by a TREMEC five-speed manual transmission. This restomod appears well detailed, right down to the painted Judge stripes. The owner rates its condition as #2 and says it remains in “ready to show” condition.

Starting with what the owner describes as a “driver-quality” GTO Judge, the build included restoring the body with a respray in the correct Carousel Red paint. Performed by Showcar Specialties, in Missouri, using the Spies Hecker paint system, the finish appears to remain in very good condition. The owner reports no blemishes, swirl marks or rust, while also noting the glass and window seals are “like new.” The body has no modifications, except that rather than applying conventional “Judge” reproduction tape stripes and graphics, they were hand-stenciled and painted, then covered with multiple layers of clear, for a smoother, more integrated appearance. The only other apparent deviance from stock are the larger alloy interpretations of the classic Pontiac Rally II wheels.

Like the exterior, this GTO’s Parchment cabin appears mostly stock, but it hides a few more subtle enhancements. During the restoration, the upholstery, door panels, carpet and other major trim components were replaced with new parts from Legendary Interiors. It has the correct wood steering wheel and a tilt steering column. The bucket seats were enhanced with bolsters and other updates include gauges that were rescreened in white, but retain the original-style font on the readouts — including the face of the hood tach. Additionally, the original radio is retained, but its internals were upgraded by Modern Fidelity. All of the gauges and interior lights work normally as does the air-conditioning system.

Under the hood is a Gary Duckworth Racing-built 467-cubic-inch V-8 that has been dyno-tested to the tune of 500 horsepower at 5,400 rpm and 560 pound-feet of torque at 4,100 rpm. It is based on an Indian Adventures aftermarket cylinder block featuring splayed four-bolt main caps, with supporting components including a forged rotating assembly, Butler/Edelbrock ported aluminum cylinder heads (with 2.11/1.77-inch valves), a custom-grind Comp Cams roller camshaft, T&D roller rockers, an Edelbrock Performer RPM intake manifold and a Holley 850-cfm four-barrel carburetor. Supporting elements include an MSD ignition box and coil, a March serpentine-style accessory drive system and an aluminum radiator with twin electric fans. A custom exhaust system from Chief Many Horses includes an electronically operated cutout, activated by an under-dash toggle switch. The engine also incorporates a correct Pontiac Ram Air air-cleaner assembly for a more authentic appearance. The owner says the engine starts, idles and runs very well on premium pump gas.

Backing the built 467 engine is a Tremec TKO-600 five-speed manual transmission, matched with a Hayes billet flywheel and Centerforce dual-friction clutch, along with a Lakewood scatter shield and a Hurst short-throw shifter. The gearbox channels torque via a Williams aluminum driveshaft to a Moser-built 12-bolt rear axle, with a limited-slip differential, 31-spline axles and C-clip eliminators. The axle ratio is 3.73:1. There are no reported issues or leaks with the drivetrain components.

The car rolls on Circle Racing Rally II 17-inch wheels in front and 18-inch wheels in the rear, all wrapped in Continental performance tires: Extreme Contact 225/50ZR17 in front and Sport Contact 275/45R18 in the rear. The seller indicates that the rear tires are about eight years old, while the fronts are about three years old, with all of them showing good tread depth. The suspension and wheel/tire upgrades are said to transform the driving dynamics of the car. The seller reports no issues with the handling or braking of this reimagined Judge.

This vehicle will be sold on a clean Massachusetts title in the seller’s name. The car also has PHS documentation, but the seller doesn’t have any paperwork or receipts from the previous owner regarding the restoration. Nevertheless, the apparent quality of the work speaks volumes. The seller is also including an extra set of 18-inch Circle Racing wheels shod with Continental ContiSportContact 2 tires.

From the restored body and interior to the enhanced powertrain, suspension and brakes, this authentic 1969 Pontiac GTO Judge’s early entry into the restomod movement remains contemporary and fresh looking. The comprehensive extent of this build features a host of additional components not listed above, including line lock, stainless-steel Rock Valley gas tank, a power cut-off switch and an Odyssey Extreme AGM battery.