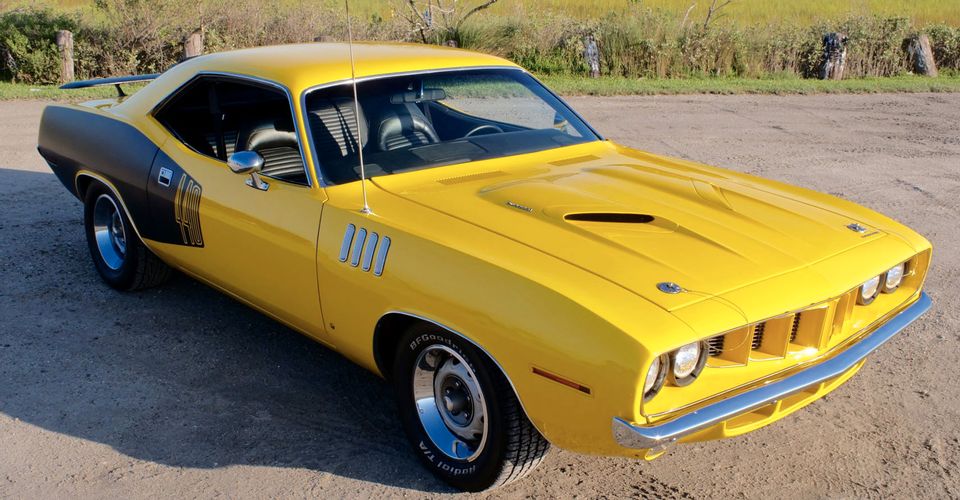 When Dodge and Chevrolet reignited the old muscle car wars of the 1960s and 70s by reviving the Challenger and Camaro over a decade ago, nobody could have foreseen the monstrous beasts that are currently rolling out of Detroit factories. But amid the impressive Demons and Hellcats with their supercharged Hemi V8 engines and the track-focused Shelby Mustangs in GT350 and GT500 trim, there’s still something about the old classics that can’t be beaten by modern performance vehicles (even if from a performance perspective, there’s really no contest). Part of what’s missing from today’s marketplace is simply a lack of variety, as the massive conglomerates have shut down sub-brands like Mercury, Plymouth, and Pontiac. However, if Fiat-Chrysler were to bring back Plymouth for the current age, this 440-powered 1971 Barracuda currently listed on the auction website Bring a Trailer would serve as excellent inspiration for a potential reboot.

By 1971, The Barracuda had become a sibling of its contemporary Dodge Challenger, leaving its previous platform-mates of the Dodge Dart and Plymouth Valiant behind. But, there were significant differences between the ‘Cuda and the Challenger, including a completely different exterior with no shared sheet metal and a two-inch shorter wheelbase.

This example is powered by a replacement V8 displacing 440ci and equipped with a four-barrel carburetor atop an Edelbrock intake manifold. A dual exhaust setup is fed by aftermarket TTi headers and features mufflers from DynoMax. Other light modifications include an aftermarket Griffin radiator and a high-output alternator. The setup routes power to the rear through a three-speed automatic with overdrive and a solid rear axle equipped with 3.90 gearing.

The interior is a simple affair, with black vinyl matching a Mopar Tuff-style steering wheel and a Rallye instrument cluster. If Fiat-Chrysler were actually to listen to the rumors and bring back the ‘Cuda, perhaps a simpler interior available on lower-trim levels other than with the Demon Crate could be a good bet to help keep prices low. In the meantime, this car’s auction has already reached $20,000 with six days remaining until the final gavel.