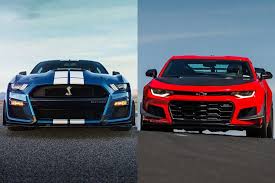 The Ford Mustang and Chevrolet Camaro have been battling it out head-to-head since the 1960s. While the engines and designs and features have changed over the years, one thing remains the same — these two rear-wheel drive (RWD) performance coupes are still fierce competitors.

While not much changes with either of these American muscle cars for 2020, a few small updates keep things fresh, and an all-new top-of-the-line performance version of the Mustang enters the fray and ups the ante further. Below we’ll take a look at how these two legendary muscle cars compare headed into the new model year

Both the Mustang and Camaro wear retro-inspired designs that harken back to their 1960s counterparts. That said, the Camaro manages to incorporate modern styling cues while the Mustang leans more heavily toward the past. In coupe form, the Mustang has a taller greenhouse and more rounded proportions than the Camaro. Thanks to this, the Mustang also comes with considerably better outward visibility. Up front, the Mustang has a trapezoidal grille flanked on either side by upward-slanting headlights. Down the sides are two strong character lines that give the vehicle a muscular look. Around back is arguably where you’ll find the Mustang’s strongest tribute to the original 1960s design, as the rear incorporates a black bar that joins both of the taillights, which themselves include 3-part progressive turn signals. See the 2020 Ford Mustang models for sale near you

As mentioned before, the Camaro is a little more modern looking than the Mustang. A flat rear deck lid with a ducktail spoiler, prominent rear haunches and a quad rear tail lamp design all serve as retro cues, but up front, the Camaro has a large grille opening bisected by a body-colored bar surrounded by large air vents and narrow headlights. As with the Mustang, the Camaro’s headlights incorporate LEDs, but in this case they meander toward the bowtie emblem at the center of the grille. The Camaro’s greenhouse is small and low-slung, which contributes to its especially poor visibility. Overall, while the Mustang’s design is a little more conservative and derivative, the Camaro takes more risks, which has resulted in mixed opinions from purists and enthusiasts. See the 2020 Chevrolet Camaro models for sale near you

In most trims, the Mustang and Camaro offer room for four passengers via a very tight and cramped back seat. While it’ll work for kids in a pinch, neither car is a great option if you plan to ferry around more than one adult passenger on all but the rarest of occasions. In this vein, interior dimensions of both of these cars are similar, but the Camaro’s body lines and window shapes make for a much more claustrophobic experience than in the Mustang.

As with the exterior, the Mustang’s interior is a little more retro-inspired than that of the Camaro. A Mustang logo adorns the steering wheel, while three circular air vents sit at the top of the center stack. As was the case with Mustangs of the muscle car era of the late 1960s, chrome and brushed aluminum are found throughout the cabin of the modern-day Ford Mustang.

Where the Mustang’s interior relies on rounded, circular styling elements, the Camaro relies on triangles and trapezoids. That said, the Camaro’s center air vents are circular, just like the Mustang’s, but they’re positioned just ahead of the gear shifter and below the center infotainment screen. While muscle cars aren’t known for offering spacious interiors, the Camaro’s cabin is far more dungeon-like than that of the Mustang. While this could appeal to some, most will likely find it to be a little claustrophobic.

Both vehicles come with competent infotainment systems with Android Auto and Apple CarPlay compatibility. A 4G LTE connection is offered via a monthly subscription, which can turn your car into a Wi-Fi hot spot. Upper trim levels of the Mustang can be had with a massive 12-in digital gauge cluster that allows for loads of configurability. While it still uses an old-school mechanical gauge cluster, the Camaro still offers clear instrumentation and well-placed controls.

Also worth noting: The Mustang offers much more than the Camaro in the way of cargo space, with 13.5 cu ft. to the Camaro’s 9.1.