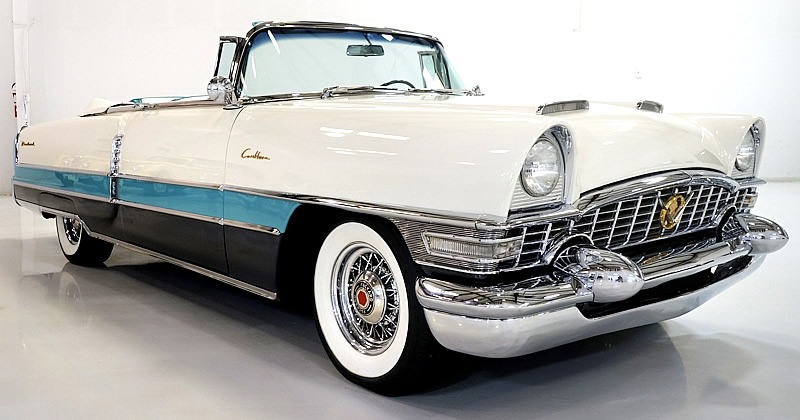 The three-tone paint styling that we see on this 1955 Packard Caribbean Convertible is something that was quite unique to the senior Packard line-up.

The Caribbean, around since 1953 and elevated to senior Packard status in 1954 was a flagship model. It was only available as a convertible until its final year in 1956 when a coupe was added.

1955 saw a restyle but because of cost limitations they still used the same body shells that had been in use since 1951. There was a new wraparound windshield and clever use of new trim and slight modifications such as headlights and taillights, it was hard to spot what they had done. Major credit has to go to the Packard designer Richard Teague for an amazing transformation.

Sitting at the top-of-the-line the Caribbean had a whole host of standard features that were optional extras of other cars in the Packard line-up.

The heater was standard. We take that for granted now but it was an $80 option in other Packards. Other features that came standard included: Radio with antenna, 4-way power front seat, power windows, power steering, power brakes, fender skirts and full wheel covers and a full leather interior.

Packard were now finally using V8 engine starting at 320 cubic inches. The Caribbean enjoyed the benefits of the larger 352 cubic inch displacement engine with the most powerful option using dual 4-barrel carburetors. This produced 275 horsepower and came with an Ultramatic Drive automatic transmission as standard, although a 3-speed manual was available as a special order.

Also new for 1955 was Packard’s Torsion Ride self-leveling suspension, something that made Chrysler sit up and take notice as it proved to be exceptionally smooth and something to rival their ownTorsion-Aire.

Packard produced just 500 of these Caribbean Convertibles for the 1955 model year at a base price of $5,932.  This was an expensive car in its day. A Series 62 Cadillac Convertible the same year would have cost around $1,500 less! But make no mistake these were classy cars with Packard producing some lovely cars in the mid fifties. It was such a shame that they were to last just three more years.