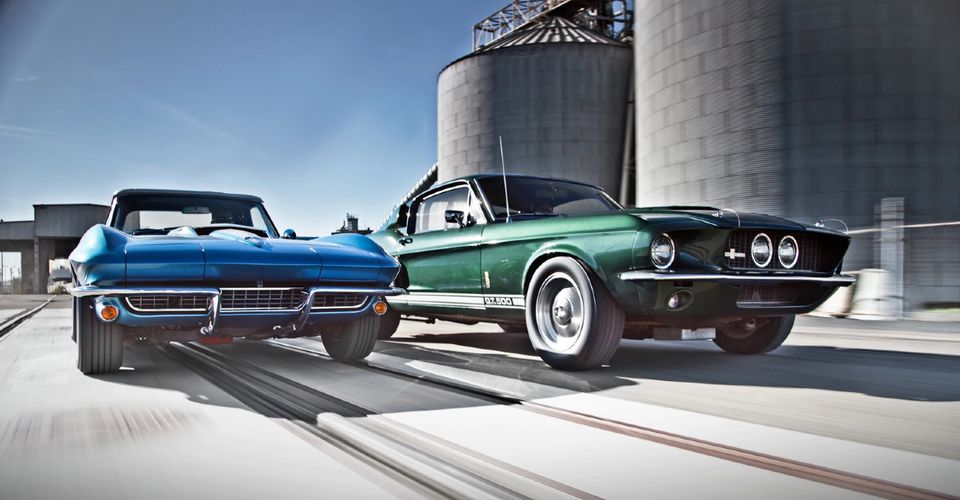 America has produced some truly spectacular cars and if you were to draw up a list of some of the greatest cars in its history I can guarantee you that both the Chevrolet Corvette and the Ford Mustang would feature in it heavily. For over half a century these two premier American sports cars have been leading the way in terms of performance, engineering, and innovation.

The world was first introduced to the Chevy Corvette in 1953 at the General Motors Motorama Auto Show in New York City. It was named after a small class of warships that were used during the second world war. Equipped with a 3.9-liter six-cylinder engine the first C1 Corvette rolled off the assembly line, 299 more examples would follow after that.

Over 10 years after its Chevrolet counterpart, the original Ford Mustang went into production. It was a collaborative effort between Ford and Shelby American which produced one of the greatest American Muscle cars of all time.

The Corvette was originally a publicity stunt launched by former GM Chief Designer Harley J. Earl. The idea was that America needed a sports car to compete with European carmakers, Ferrari, and Lamborghini. His ingenious idea succeeded and the Chevrolet Corvette was released in 1953. It was the first American sports car and it was ready to take one the world.

The only problem was that the car didn’t sell, well, at first. Despite its sporty look, the car didn’t have a powerful enough engine and this made it unappealing to customers. After a couple of years trying to find its identity, the Corvette was finally equipped with an engine worthy of a sportscar.

In 1969 the Corvette became recognized as the official car for astronauts after members of the Apollo 12 were pictured with their custom 390-hp 427 Corvette Stingray coupes. This unofficial endorsement boosted the car’s popularity and cemented it as America’s premier sports car.

Unlike its Chevy compatriot, the Ford Mustang was anything but a slow burner. When it was released in 1964 the car was an instant hit! It sold almost half a million units in its first year, creating its own vehicle class in the process. The pony car can attribute most of its early success to the Steve Mcqueen movie Bullit which was released in 1968.